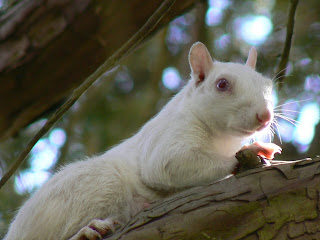 “Albert” as we affectionately like to call him, is a true albino squirrel as he has not only a white coat but the blue eyes – which can be seen in this photograph I took yesterday afternoon. Albert or Alberta, as we havn’t had an actual identification, has been around in the grounds of Iffin House since September 2009.

He can often be seen from the dining room scampering along the wall by the drive at breakfast time en route to our neighbours bird feeder! At other times in the mature yew tree where he was posing yesterday.

As Albert is becoming rather a feature here I thought I should do some research regarding the albino squirrel – so here goes!

There is no particular species of squirrels, with a plain white fur coat. The change in the colour of fur is caused by variations in the production of melanin and the amount of melanin in the fur, determines its body colour. It is the genes that determine the pattern and control of melanin production and genetic changes that causes a reduction in the melanin production results in a white fur coat and squirrels with such fur coats are called white squirrels. These are not common, as such genetic changes are rare to occur.

However, most of the white squirrels are not albino squirrels, but are those squirrels, who have a white fur coat, due to leucism, which is caused by a a recessive gene found within certain eastern gray squirrels.

Albino squirrels have a white fur coat, and, have pink or blue eyes, due to a genetic condition called albinism. This is a rare condition, when compared to white squirrels. So, the basic difference between white and albino squirrels lies in the eye color. In case of albino squirrels, the absence of melanin in the eyes affect their vision and impaired vision results in falls and injuries, that leads to loss of life.

This makes it very rare to find a true albino squirrel.

This website uses cookies to improve your experience while you navigate through the website. Out of these, the cookies that are categorized as necessary are stored on your browser as they are essential for the working of basic functionalities of the website. We also use third-party cookies that help us analyze and understand how you use this website. These cookies will be stored in your browser only with your consent. You also have the option to opt-out of these cookies. But opting out of some of these cookies may affect your browsing experience.
Necessary Always Enabled
Necessary cookies are absolutely essential for the website to function properly. This category only includes cookies that ensures basic functionalities and security features of the website. These cookies do not store any personal information.
Non-necessary
Any cookies that may not be particularly necessary for the website to function and is used specifically to collect user personal data via analytics, ads, other embedded contents are termed as non-necessary cookies. It is mandatory to procure user consent prior to running these cookies on your website.
SAVE & ACCEPT